Knowing WHERE to make the mark 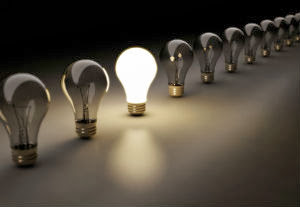 There is a true story about Charles Steinmetz, a great electrical engineer in US.

In the early years of 21 century, one day when GE’s most expensive and complex giant generator stopped working and a full staff of engineers and mechanics couldn't get the equipment to work after trying everything that they could think of....  so they called Steinmetz and at that time he had retired from GM for a while. Steinmetz came in, he rejected all assistance and asked only for a notebook, pencil and cot. Steinmetz listened to the generator and scribbled computations on the notepad for two straight days and nights. On the second night, he asked for a ladder, climbed up the generator and made a chalk mark "X"  on its side. He told GE’s engineers the problem was under the mark and he left. They did, the malfunction was corrected and the generator performed to perfection.

GE managers were thrilled until they got an invoice in the amount of $1,000, obviously back then it was quite big amount, some people thought that was too much for a simple mark "X". So they asked for an itemized bill. Steinmetz responded with the two lines:

They paid the bill.

"Ideas are like chalk marks "X": as simple as they seem, it is all about knowing how to leverage ideas and knowing where, when and why to use even the smallest ones can make all the difference to the business."

Once there was a payroll department of an organization, one of routine jobs there was to collect the time sheets data from different business units and manually type them into payroll system, it was a tedious job without a doubt and sometimes could come with many typing errors, one day there was a newly joined person had an idea that there could be a way to automate process and import the data into the payroll system without typing, he tried and succeeded. The results were remarkable:


It was a quite small and simple mark but it made a difference to the business.
Posted by newebiz